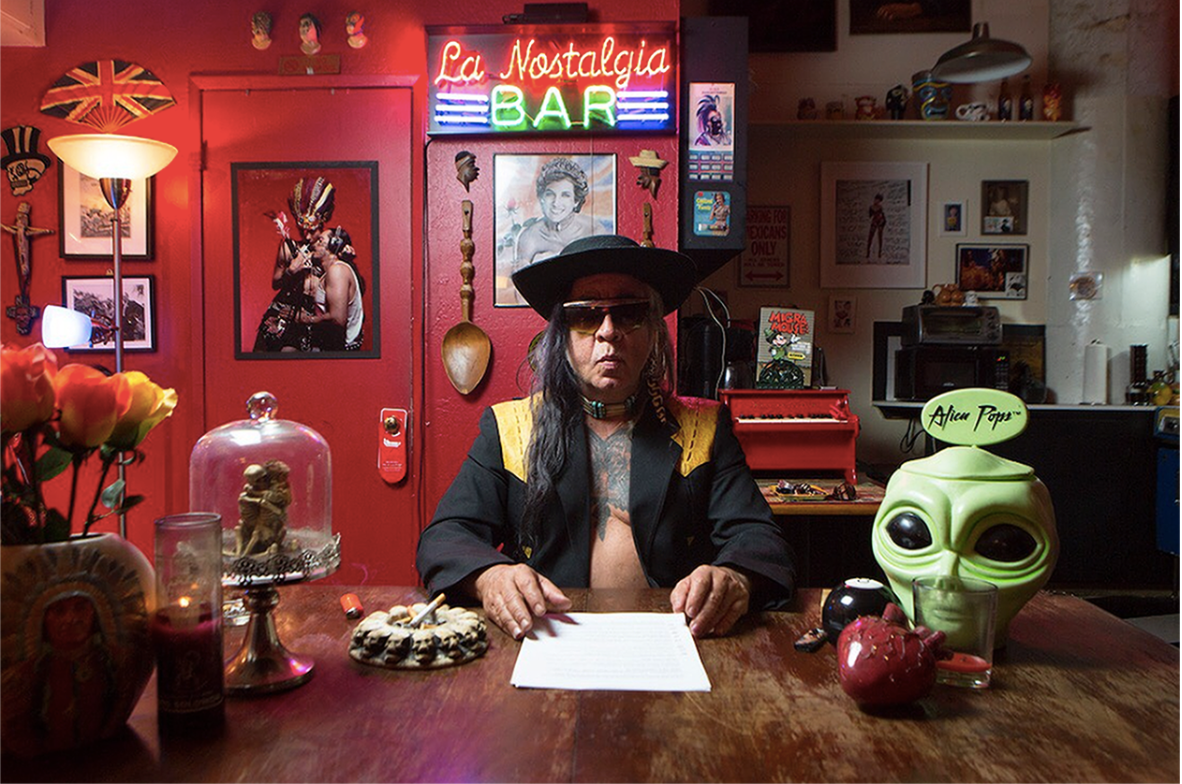 Jane Addams Hull-House Museum (JAHHM), is working with internationally renowned artist Guillermo Gómez-Peña as one of the partner institutions participating in “Toward a Common Cause: Art, Social Change, and the MacArthur Fellows Program at 40,” a multi-venue exhibition and program series featuring 28 MacArthur Fellows happening throughout 2021.

In a first-ever partnership, Jane Addams Hull-House Museum, Public Media Institute and the University of Chicago’s Smart Museum of Art will present a series of experimental audio performances from performance artist, writer, activist and MacArthur Fellow, class of 1991 Guillermo Gómez-Peña.

“With this unique partnership between the museum and Public Media Institute, UIC is honored to be in dialogue with Guillermo Gómez-Peña, one of the living masters of political theater and theatrical criticism,” said Rebecca Rugg, dean of UIC’s College of Architecture, Design and the Arts.  “We are thrilled that through this programming, his voice, excellence and repertoire will be available to our students and the Chicago community.”

Beginning on Wednesday, Jan. 27, at 6:30 p.m. (CST) the series, “Gómez-Peña’s Mex Files: Audio Art & Strange Poetry from the U.S./Mexico Border (1985–2021),” offers multilingual live radio and a selection of archival audio programs by the artist addressing “the multiple pandemics of racism, sexism, xenophobia and neo-colonialism in the Trump Era.” Throughout his life, Gómez-Peña has worked in audio art and radio across multiple genres, from poetic journalism to Spanglish spoken word, radical storytelling and collaborations with musicians, poets and activists. This ongoing series will present samples of his previous work (1980-2015) and newly recorded material created in the last two years and during lock-down. The twice-monthly show will be at 6:30 p.m. (CST) on 105.5 FM WLPN-LP Chicago and streamed on twitch.tv/lumpenradio and hullhousemuseum.org .

Gómez-Peña’s Mex Filesis highlighted by the live radio performance “An Open Letter to the Museum of the Future”on Feb. 3, 2021, at 7 p.m. (CST). Gómez-Peña has an obsession with rewriting and restaging so-called “Western Art History” while highlighting colonial legacies of systematic exclusion, demonization and fetishization of Black and indigenous bodies, according to the artist. This keynote challenges contemporary art museum practices and calls for an open discussion regarding radical restructuring from within. Later in the radio series, Gómez-Peña will be joined by invited luminaries in the field who will offer their own responses to the Museum of the Future.

On Sept. 9, 2021, the week of the 161st anniversary of Jane Addams’ birth, JAHHM will present new performances and experimental audio by Guillermo Gómez-Peña and La Pocha Nostra. The exhibition, which will continue until May 31, 2022 at JAHHM, also will present archival materials and videos from a number of collaborative Chicago-based performances, including the iconic “The Year of the White Bear and Couple in The Cage: Two Undiscovered Amerindians Visit the West,” devised and performed with artist Coco Fusco, which traveled to Chicago’s Field Museum in January 1993 in collaboration with the Mexican Fine Arts Center Museum (now the National Museum of Mexican Art). Gómez-Peña’s insurgent performances challenge how museums represent so-called discovered people and take back the commons on behalf of outsider identities and marginalized communities.

“In 2020, public demonstrations amplified demands for monuments, memorials and museums to reflect the histories and the lived experiences of marginalized communities,” said Ross Stanton Jordan, JAHHM interim director and curatorial manager. “The public outcry demonstrated the connection between cultural representation and democratic participation that were central to the social reform efforts of Jane Addams and Hull-House Settlement over 100 years ago.”

JAHHM will present Hull-House social reformers’ efforts, with their immigrant neighbors, to provide access to the arts and create a common museum. The Hull-House Settlement’s first new building was the Butler Art Gallery, Chicago’s first public art gallery.  The location of the gallery, in the most disenfranchised and disinvested area of the city, was a testament that art should be accessible in communities of all kinds. In 1900, Hull-House co-founders Jane Addams and Ellen Gates Starr opened the Labor Museum. The experimental museum provided craft demonstrations in textiles, metals, woodwork, and bookbinding in an effort to reflect the diverse cultural heritage present in the congested and disregarded immigrant community. The experimental museum used historical interpretation and cultural performances to break down barriers — within immigrant families, and between immigrants and their American neighbors — to present women’s work and immigrant culture as valuable. JAHHM exhibition will look back on these cross-cultural experiments in relation to present-day demands for structural change inside cultural institutions.

More information can be found at hullhousemuseum.org

Guillermo Gómez-Peña (Mexico City, 1968) is a performance artist, writer, activist, radical pedagogue and artistic director of the performance troupe La Pocha Nostra. Born in Mexico City, he moved to the U.S. in 1978, and since 1995, his three homes have been San Francisco, Mexico City and the “road.” His performance work and 21 books have contributed to the debates on cultural, generational and gender diversity, border culture and North-South relations. Gómez-Peña artwork has been presented at more than 1,000 venues across the U.S., Canada, Latin America, Europe, Russia, South Africa and Australia. A MacArthur Fellow, USA Artists Fellow, and a Bessie, Guggenheim, and American Book Award winner, he is a regular contributor to newspapers and magazines in the U.S., Mexico, and Europe. Gómez-Peña is currently a Patron for the London-based Live Art Development Agency and a Senior Fellow in the Hemispheric Institute of Performance and Politics. For an archive of Gómez-Peña’s performances, visit guillermogomezpena.com.

Public Media Institute is a non-profit 501(c)3, community-based art and culture organization with a mission to create, incubate and sustain innovative and equitable cultural programming through the production and presentation of socially engaged projects, music and art performances, books and magazines, community aid platforms, festivals, radio and video broadcasting, and visual art exhibitions. For more information and streaming radio, visit the website, www.publicmediainstitute.com.

About Toward a Common Cause: 28 MacArthur Fellows have been selected to participate in “Toward Common Cause: Art, Social Change, and the MacArthur Fellows Program at 40,” an expansive multi-venue exhibition organized by the Smart Museum of Art at the University of Chicago in collaboration with more than two dozen exhibition, programmatic, and research partner organizations across Chicago. It is supported by the John D. and Catherine T. MacArthur Foundation. The exhibition, which celebrates the 40th anniversary of the MacArthur Fellows Program, will encompass a broad spectrum of contemporary artistic practice, including community-based projects realized in public spaces as well as solo and group presentations in multiple museum, gallery, and community spaces. The full list of participating artists is below and online at the exhibition website, towardcommoncause.org.

Jane Addams Hull-House Museum, or JAHHM, is on the campus of the University of Illinois Chicago and part of the College of Architecture, Design, and the Arts. The museum draws upon the legacy of international peace activist, suffragist and feminist Jane Addams and other social reformers who lived and worked alongside their immigrant neighbors to create social change on the Near West Side of Chicago. The museum is located in two of the original buildings: the Hull Home (a National Historic Landmark) and the Residents Dining Hall. The museum connects the histories of the Hull-House Settlement to present-day social justice issues. Exhibitions and public programs highlight histories of activism, progressive education and democratic principles of participation and exchange. Learn more at hullhousemuseum.org.

University of Illinois Chicago, College of Architecture, Design, and the Arts, or CADA, educates and mentors the next generation of visual and performing artists, designers, architects, art historians and museum professionals. The college is composed of the School of Architecture, the School of Art & Art History, the School of Design, and the School of Theatre & Music, as well as the Jane Addams Hull-House Museum (a National Historic Landmark and museum committed to social justice), Gallery 400 (a dynamic, cutting-edge contemporary art gallery), and Innovation Center (an incubator for interdisciplinary innovation, collaboration and education). The college is home to an energetic, award-winning, internationally recognized faculty of practicing architects, artists, designers, museum professionals, art historians, musicians, directors and theatrical performers. Through their instruction and ongoing research, the faculty introduces students to disciplinary and professional themes of contemporary importance and fosters a vibrant atmosphere of intellectual and creative inquiry in a transformative learning environment. The goal: to help students become critical thinkers, innovative practitioners, involved community members and leading professionals. Learn more at cada.uic.edu.

“Gómez-Peña’s Mex Files: Audio Art & Strange Poetry from the U.S./Mexico Border” is presented by Jane Addams Hull-House Museum in partnership with Public Media Institute. It is an initiative of ‘Toward Common Cause: Art, Social Change, and the MacArthur Fellows Program at 40,’ organized by the Smart Museum of Art at the University of Chicago. Toward Common Cause is supported by the John D. and Catherine T. MacArthur Foundation.