Artful building: The story (so far) of the new Center for the Arts 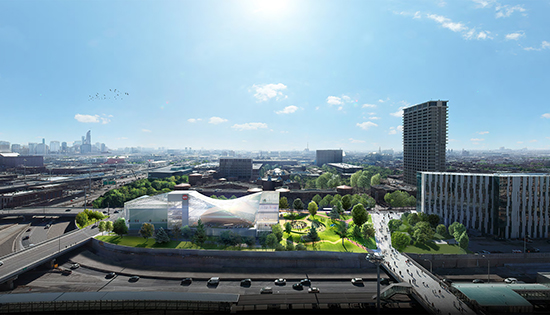 From its inception, UIC has been known for highly aspirational, yet doggedly practical civic architecture. Not only was the school conceived as an urban public university accessible to all via the expressways and public transportation of post–World War II Chicago, but also, much of Walter Netsch’s designs for the campus buildings derive from his “Field Theory,” a three-dimensional geometry based on the double helix of DNA and intended to facilitate engagement with the university’s riches at every step – transforming corridors into exhibition spaces, stairs into amphitheaters, and roofs into classrooms.

In the late 1960s, during construction of the UIC campus, Netsch was also quietly working for a small group of university administrators on “Project Y,” a massive new arts complex for UIC to be located across the highway in the West Loop. Conceiving the complex as “an equivalent of Lincoln Center to Chicago,” Netsch planned a Field Theory project with a central plaza, as well as four theaters, a recital hall, spaces for music, drama, and dance education, and an art museum. 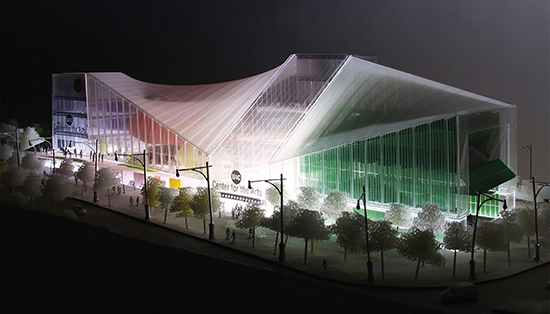 From Project Y to Project Yes

Project Y was never built, but nearly fifty years later, an arts center for UIC has reemerged in earnest – first in 2016, through a speculative exhibition at Gallery 400, Back to the Future: Visualizing the Arts at UIC, followed by an international design competition to select an architectural team for the project, and then last spring, with the announcement of three finalist teams, a public symposium, and the awarding of the commission.

The University asked three finalist teams to produce compelling conceptual and visual material not only to represent the innovative work of the schools within CADA, but also to contribute to UIC’s distinctive mission to be a leader both in research and in educating a diverse student body. The building – which will provide a home for the School of Theatre & Music and accommodate a concert hall and main-stage theater, among other public spaces – is envisioned as a dynamic center at the intersection of thinking and making, where new ideas are explored and where each stage of the process of creative production is shared with the broader world.

The three finalists, all with worldwide reputations for award-winning design work, thoughtful approaches to urban public space, and extensive experience leading multimillion-dollar projects, included the Office of Metropolitan Architecture (OMA) and Koo Architecture (New York/Chicago, and founded by School of Architecture alum Jackie  Koo); JohnstonMarklee and UrbanWorks (Los Angeles/Chicago, and including President of UrbanWorks Robert Natke, an alumnus of the School of Architecture); and Morphosis and STL (Culver City, California/Chicago). In April, the teams presented their design concepts to the University and the public. Students who attended the presentations and asked the teams questions about their proposals, and then brought their informed enthusiasm to the classroom, where animated conversations about the three concepts continued with their professors. Students also provided feedback on the presentations to the University.

Preparing for something as culturally and socially transformative as a new arts center in an exemplary public university requires institutional introspection as well as open community dialogue, so last spring CADA hosted the Otto and Marlys Coelln Symposium “Public Performances: The Arts and Politics of Architecture.” Funded by the donors’ bequest, the one-day event was held on Saturday, March 23, at the School of Architecture.

Presented in conjunction with the design competition for the arts center, the symposium offered panel discussions in three “acts,” which aimed to redefine the relationships between public and private spaces and enliven the idea of higher education as a public good. At a moment when that idea is in question, the imaginative potential of a project such as a public university art center relies on redefining “public” so that it might complement and enlist “private,” rather than meekly contradict it. Starting from this position, the symposium sought to advance architecture as a particular kind of world-making that circulates through words, matter, and images. Lead representatives from all three of the finalists for the commission participated in the symposium, articulating the ideas and perspectives driving their design concepts for the arts center.

“Act I: Script (Architecture after Identity)” addressed the ways in which architecture is a speech act, like a bet or a promise – something that declares another reality, rather than a mere transcript of predetermined expectations. Moderated by Robert Somol, Director of the School of Architecture, the Act 1 panel included Christine Mary Dunford, Director of the School of Theatre & Music, UIC; Shohei Shigematsu, OMA; and Kenneth Warren, University of Chicago.

Onward – with insights and a team

A month after the symposium, UIC and CADA announced OMA and KOO LLC as the winner of the international competition. Walter Benn Michaels, Interim Dean of CADA at the time, said, “We were fortunate to have three spectacular proposals, but OMA/KOO’s is exemplary in the way it provides physical and visual access to each stage of the dynamic process of creative production. . . . This design both creates a central space for thinking and making and provides a vivid image of the innovative work of the schools of the college. Practically speaking, it also provides a highly flexible phasing strategy.”

The center will be located on the northwest corner of UIC’s east side of campus at Halsted and Harrison streets in a currently vacant location known as Harrison Field. Visible from the three expressways as well as from downtown Chicago, and accessible from the CTA’s revamped UIC/Halsted Blue Line station, the OMA/KOO building will be a prominent landmark that bridges the West Loop and campus. As a public, urban hub for performance and gathering, and a home for the School of Theatre and Music, the project includes an 88,000-gross-square-foot building with a 500-seat concert hall and a 270-seat flexible main stage theater, as well as instrumental and choral rehearsal halls and theater production shops. Also included are supporting facilities, a donor lounge, small café/jazz club and exhibition space.

OMA/KOO’s concept design proposes two towers: a student tower that faces the campus and opens to a performance park along the Peoria Street bridge, and a public tower that looks to the cityscape and opens to a Phase One screening plaza along Halsted Street. Large ramps flow from the street to connect the outdoor and indoor performances spaces, including the concert hall between the towers, and the Phase Two mainstage theatre on Halsted Street. Production spaces line Harrison Street on the ground floor.

The design for the center includes a translucent, tent-like roof with embedded photovoltaics. Stretching from and between the towers, the roof covers the concert hall and the mainstage theatre, and the colors of the performance space volumes are intended to shine through the translucent areas.

“It is a great honor both as a UIC alumna and as an architect practicing in Chicago to be part of such an important cultural project,” Jackie Koo, founder of KOO said. “We wanted our design to transparently showcase the pedagogy of CADA and how UIC is a school that succeeds at educating future creative leaders while being accessible to all.”

The aspirations and practical considerations of an ambitious urban public university evolve in exciting ways over time, but the importance of designing with them in mind, as Netsch did a half century ago, remains at the center of UIC’s character. Shohei Shigematsu, a partner of New York–based OMA, said the design was inspired by Netsch, by reinterpreting his principles to conceive “a unique flexibility” for the concert hall.

“We are honored to be awarded this project that will serve as a new cultural anchor for the students of UIC and the city of Chicago. Our design focuses on fostering dialogue between performance and the public – the new building will be a connector between the city and UIC’s urban campus,” Shigematsu said. “In collaboration with the College of Architecture, Design, and the Arts and the School of Theatre and Music, we hope to create an openness and extreme accessibility by introducing a new platform for the diverse activities of UIC.”