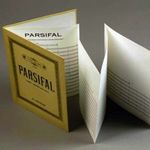 Rodney Graham (born 1949) is a conceptual artist in the truest sense. His work can not be identified by a specific style or medium, and it encompasses sculpture, literature, film, music, and photography. Hamza Walker of the Renaissance Society has described his practice: “The word most often used to describe his practice is interpolation, the alteration or corruption of text by inserting other text or foreign matter.” Since 1983 Graham has been interpolating texts and musical scores from sources as diverse as Sigmund Freud, Richard Wagner, Ian Fleming, Herman Melville, and Dr. Seuss.

Graham has had numerous international exhibitions, in Madrid, Cologne, Paris, Antwerp, New York, and London. Two works, School of Velocity and Parsifal, are currently on view at the Renaissance Society, Chicago. School of Velocity features Czeny’s altered sheet music and a baby grand piano designed to play the notes at intervals derived from a geometric progression taken from experiments pioneered by Galileo. Parsifal is based on Englebert Humperdink’s supplement to Wagner’s Parsifal.

Special thanks to Suzanne Ghez and Hamza Walker from the Renaissance Society.