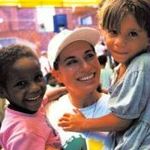 Monika Treut (born 1954) screens her new film Warrior of Light, a documentary on Yvonne Bezerra de Mello, an artist and human rights activist, who has gained international recognition for her radical support of the streetchildren of Rio de Janeiro, through her organization Projeto Uere. The film recently premiered at the Toronto Film Festival.

Past films include Gendernauts (1999), Didn’t Do it For Love (1997), Female Misbehaviour (1992), My Father Is Coming (1991), Virgin Machine (1988), and Seduction: The Cruel Woman (1985). Her work possesses a transgressive brand of filmmaking that is a much needed intervention into the arena of sexual politics and has been shown at festivals throughout the world, including Berlin, Montreal, Cannes, and Toronto. Retrospectives devoted to Truet’s films have been held in Cambridge, Copenhagen, Helsinki, Lisbon, Los Angeles, Mexico City, Santa Barbara, and Toronto.