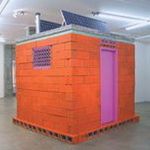 For the last decade artist Marjetica Potrc (born 1953) has been observing, researching, and re-creating human-built environments as examples of self-sufficiency and self-expression, what she refers to as “creative adaptation.” In a time when the social state is in decline and the inequitable distribution of the world’s wealth and resources prevails, billions of people survive each day in overcrowded shantytowns, unauthorized favelas, and improvised settlements without electricity, potable water, and sewage systems. These invisible cities are found in most of the world’s major cities and serve as both a source of inspiration and as site for many of Potrc’s projects around the world including Austria, Brazil, Germany, India, Italy, Luxembourg, Slovenia, and South Africa. She will discuss issues of security, privacy, and safety in informal cities and her most recent project in Caracas, Venezuela.