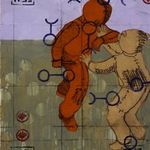 Kojo Griffin (born 1971) paints psychologically charged images of a cast of anthropomorphized fairy-tale and stuffed animals. Colorfully painted on wood panels and paper, his ambiguous narratives depict the animals in seemingly violent domestic and street scenes. Because they are set free floating on fields of geometric designs or cabala, I Ching, or science-inspired symbols, Griffin’s dark tales seem to be determined by unseen systems or ways of the universe. In his newer work whether the animals are harming or helping each other is often unclear, prompting the viewer to confront her/his own narrative interpretive tendencies.