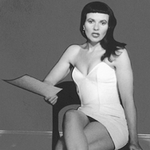 Her articles, reviews, and performance texts have appeared in Art in America, Art Journal, AfterImage, High Performance, and New Art Examiner, among others. Frueh is also author of Hannah Wilke: A Retrospective (1989) and coeditor of Feminist Art Criticism: An Anthology (1991) and New Feminist Criticism: Art, Identity, Action (1994). Also recognized as a powerful, provocative, and articulate performance artist, Frueh has presented performances at museums, galleries, universities, and conferences nationwide. She teaches at the University of Nevada, Reno, and lectures widely in her areas of expertise. Frueh received a PhD in history of culture from the University of Chicago.