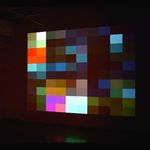 Helen Mirra (born 1970) works in sculpture, drawing, film, video, and sound. She has had solo shows at The Renaissance Society, Chicago; the Whitney Museum of American Art, New York; Stephen Friedman Gallery, London; and the Venice Biennale. This spring, she will show work at Peter Freeman, New York and Meyer Riegger Galerie, Karlsruhe, Germany. She will also travel to California to work on a letterpress project and perform with guitarist Fred Frith. Mirra is currently Senior Lecturer in Visual Arts and Cinema and Media Studies at the University of Chicago. She received an MFA in Studio Arts from the University of Illinois at Chicago.

Jason Salavon (born 1970) is a Chicago-based artist whose digital photographic and video works often appropriate images from popular culture or everyday documentation. He has recently exhibited at the Museum of Contemporary Art, Los Angeles; Inman Gallery, Houston; M-PROJECT, Paris; and the Museum of Contemporary Photography, Chicago. Salavon is currently represented by The Project in New York and Los Angeles. Salavon received an MFA from the School of the Art Institute of Chicago and a BA from the University of Texas at Austin.