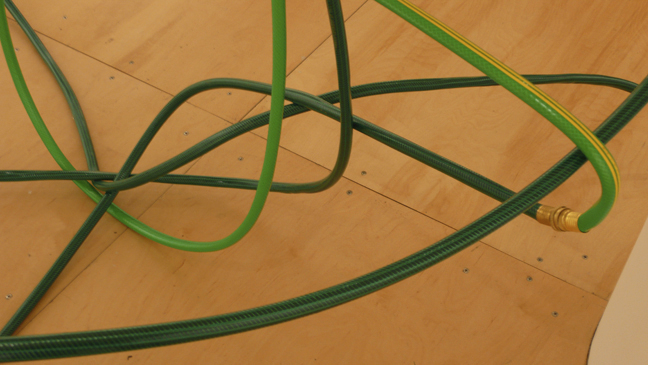 The exhibition consists of two elements, one effable and one ineffable. In order to create what he calls a “three dimensional scribble,” Cooper fills the space with garden hoses run through with rebar armatures and attached end-to-end in one continuous thread. The hoses will remain within the gallery for the duration of the exhibition. Within the mess of hoses, Cooper staged two performances in which two actors improvised a conversation about the state of their romantic relationship, the recent birth of their son, and whether or not they had recently seen a Sasquatch. During the performance, the actors continuously thwarted attempts at documentation – an action that emphasized the temporality of the performance itself, and also paralleled the question asked within the performance of whether what the characters had seen earlier that night was real.

“If one is prepared, abstraction, ethereal phenomena, and impossibility are observable everywhere. A shrub becomes Sasquatch, every blur a ghost. Some can ’t see a thing through the thicket and must interpret sounds into images. A rustling becomes a rushing little green man. Cooper ’s work reminds us that interpretations of these types—of which there are many—make clear what is always present in our explanations: projection and causality.”

Thread was commissioned as one of the projects in the 2008 At the Edge: Innovative Art in Chicago
series.