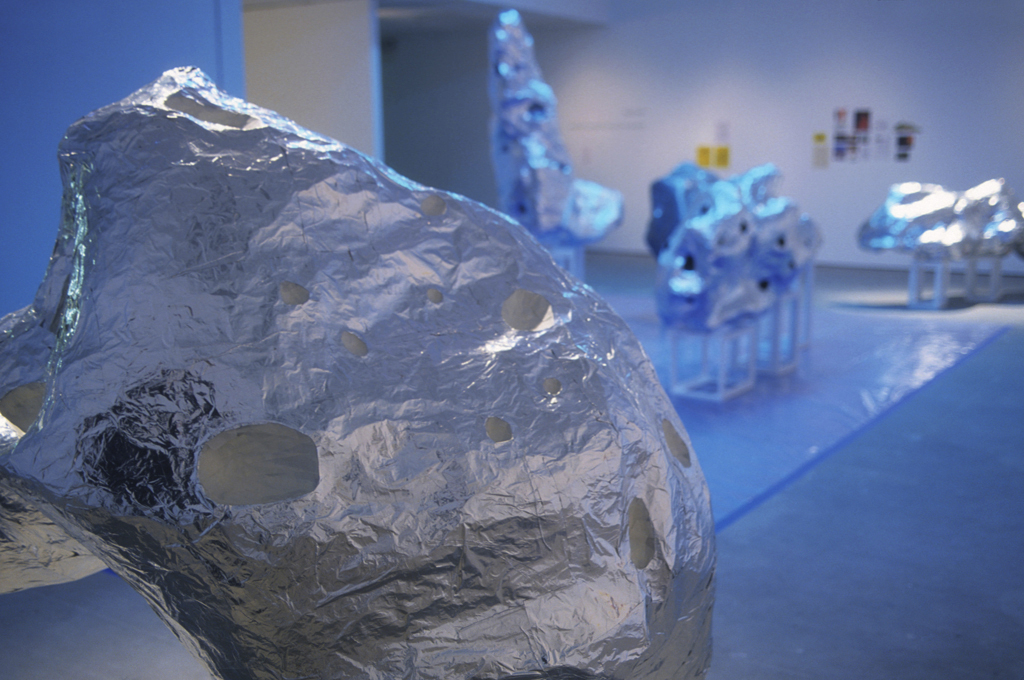 The Field is a collaborative project by the artist Dianna Frid and the writer Stephen Motika. In an earlier project called The Asteroid Mitos, the two collaborated to create a work that dealt with notions of display and site-specificity, with astronomy and the politics of planetary nomenclature, and with the fictional aspects of facts as they related to the factual aspects of fictions. The Field is an expansion of and elaboration on The Asteroid Mitos, which consisted of a display case housing a scaled reproduction of an asteroid. The elongated body was made with very simple materials: wire, paper, and a top layer of aluminum foil; its craters were demarcated by yellow-rimmed holes.

Many of these craters were purportedly named by an amateur astronomer and University of Chicago humanities professor, Dr. Leon Rhetnik. Dr. Rhetnik ’s life ’s work consisted mainly of studying how the concept of exile, so prevalent in literature and mythology, related to history and the human experience. Thus, it was apt that he would name the craters of Mitos after literary figures, who were loosely identified as exiles of one sort or another. Some of the craters ’ names, for example, included Ahab from Moby Dick and Stephen Daedalus from Portrait of the Artist as a Young Man. Dr. Rhetnik ’s obituary, along with a document with the names of the craters, is exhibited within the display case. It is mainly through the obituary, the key textual element of the work, that the viewer can piece together the relationship of the different elements in the display case.

By using materials, display processes, and resources in The Field that are, to some extent, transformable, ephemeral, and interpretive, Frid and Motika allude to the inconsistencies inherent in the systems and structures that set out to classify and measure “the universe.” By means of alternative narratives, they embed within these constructions human inconsistencies, contradictions, and desires.

In Tamara Faulkner ’s essay The Field at the Edge of the Gap: Elegance, Ambivalence, and Elegy, she describes the exhibition as creating an environment that produces “distrust and discomfort” and is “fueled by unrequited desire.” She wrote:

When we think of belief, or faith, we often think of a church, mosque, or other structure where rituals expressing those faiths are enacted. At The Field, we enter another ritualized space, a gallery, which initially bears a strong resemblance to a Christian church. Like a narthex, the darkened stripped-down corridor leads to a series of sensual spaces: a field of human-scaled bluish-silver forms set on pedestals, with spot-lit, wall-mounted clusters of texts and images suggesting apses. A ground of thick plastic, covering a barely visible assortment of pieced cloths, demarcates a forbidden zone in the center, adding to the drama, and as in most Christian churches, indicating how to proceed. We know to step around the scintillating garden of objects, though they are the most immediately inviting due to their anthropomorphic scale. This is an ordered, controlled, environment set up to service the ritual of interpretation, as long as we stay within the margins.

The Field was commissioned as one of the projects in the 2003 At the Edge: Innovative Art in Chicago series.