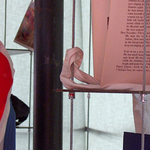 The Black Factory, artist William Pope.L s performance action installation on wheels, set sail on its final voyage, traveling to Chicago for a stop at Gallery 400 before also visiting the Hyde Park Art Center. Having toured the country in 2004 and 2005, these were the first appearances of The Black Factory in Illinois.

The Black Factory, a mobile social service experiment, required audience participation to do its work. The project incorporated an RV trailer and a staff/performance troop who traveled in the vehicle. Over the eight-hour long performance, the three-person crew stopped people on the street, fed them, cajoled them, and provoked them, all in the name of forging a new dialogue about race and community in America. Also during the event, audience members could browse Twice Sold products in The Black Factory gift shop. 100% of the proceeds from these sales were donated to a local charity.

One of the most important American performance artists today, William Pope.L has become increasingly influential in recasting the terms of artistic dialogues concerning identity and audience involvement. For Pope.L, the aim of The Black Factory was not to highlight a particular notion of black identity, but rather to find, encourage, and visualize places of difference, spaces for contact between individuals rather than archetypes exposing difference to make a difference.

William Pope.L is a multi-disciplinary installation performance artist and educator. He garnered recent acclaim with his traveling retrospective eRacism and the accompanying monograph The Friendliest Black Artist in America, from MIT Press. Pope.L was a 2005 Guggenheim fellow and the featured American artist at the Dakar Biennial in 2006. Pope.L also visited Gallery 400 in the spring of 2004 for a widely acclaimed Voices lecture.

The exhibition was accompanied by a panel discussion in Gallery 400 s lecture room, during which The Black Factory performers joined Darby English, assistant professor of Art History at the University of Chicago, and others for a conversation.