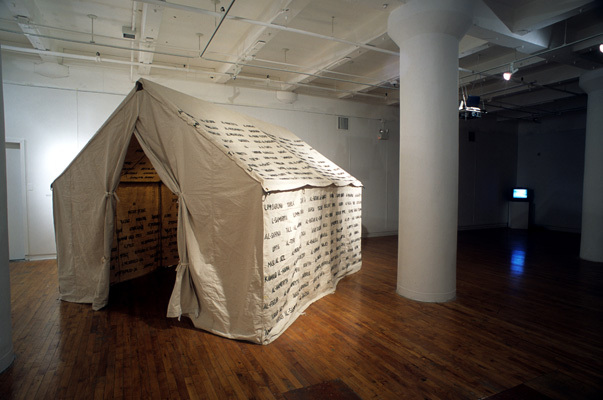 In the exhibit Settlement, the Culture and Conflict Group brings together the work of six artists from Palestine and Ireland (most of whom reside in the United States). Ayreen Anastas, Shane Cullen, Emily Jacir, Conor McGrady, Kevin Noble, and Frankie Quinn explore the impact and effects of military occupation, faltering attempts at peace, and the importance of history, memory, and memorialization in Palestine and Ireland.

Acknowledging that artists are not “neutral” beings divorced from social and political realities, but often hold partisan viewpoints, which are articulated through numerous and complex strategies, and which eschew the tried, tested, and generally outmoded concepts of a polemical “political” art, the exhibition forges public space by raising questions on issues of history, war, and representation. Through focusing on the work of those who represent the “other,” the colonized, and the dispossessed, Settlement narrows the scope of debate, but also broadens it through the presentation of viewpoints alternative to those that are currently dominant.

Through focusing on the work of those who represent the “other,” the colonized and the dispossessed, Settlement narrows the scope of debate, but also broadens it through the presentation of viewpoints alternative to those that are currently dominant.

Some pieces in the exhibition, such as the works of Shane Cullen and Emily Jacir, explore the idea of memorials to unwritten and largely ignored histories. Both acknowledge the fragility and insubstantiality of memorializing processes, as in Jacir’s installation involving a U.N. refugee tent. Stitched into the tent are the names of Palestinian villages that were depopulated or “cleansed” in 1948 with the creation of the state of Israel. In leaving some of the names blank, she testifies to the ongoing nature of Palestinian displacement. This is also the case with Cullen’s work, both in his monumental Fragmens sur les Institutions Republicaines IV (1996), which documents the smuggled letters of the Irish Hunger Strikers, and in a later piece that monumentalizes the text of the peace agreement signed by parties in Britain and Ireland. Both of these pieces attempt to record the monumentality of recent events in Irish history, but through the use of a fragile material such as Styrofoam, upon which he etched these texts, Cullen also testifies to the fragility and tenuousness of an unstable peace and unresolved conflict. For the exhibition, he presents panels from a new project involving testimonies against suspected war criminals in Israel.

Frankie Quinn’s photographs document the domestic interiors of Palestinian homes that were subject to random assault and violation by Israeli soldiers. This sense of violation and humiliation is present also in the drawings of Conor McGrady, who explores the ruptures inherent in the social fabric of Northern Ireland, and acknowledges overlaps with a similar social fabric in the occupied territories. Ayreen Anastas explores ideas of nationality and exile through the use of sound. For the exhibition, she installed a sound piece based on the songs Palestinians would have liked to play on their car stereos at Israeli military checkpoints, but were prohibited from doing so. Kevin Noble exhibits digitally altered photographs exploring the complicity of leading art world figures in the sponsorship of the illegal Israeli occupation of the West Bank and Gaza.

Trained as an architect, Anastas creates works in video, sound, and sculpture. She has exhibited at Rampe 003, Berlin; Bunker in Reinhardtstrasse, Berlin; and Art-bunker, Nuremberg. Since 1986, Cullen has exhibited widely in Europe at venues including Kunstlerhaus Bethaniem, Berlin; A16 Gallery, Zurich; Centre d’art Contemporain de Vassivière en Limousin, France; Centre for Contemporary Arts, Glasgow; and Orchard Gallery, Derry, Northern Ireland. In 1995, he represented Ireland at the Venice Biennale. Jacir has exhibited in Greater New York, P.S.1, New York; Johnson Museum of Art, Cornell University, Ithaca, NY; and Apex Art, New York. McGrady is a 1998 MFA graduate of the School of the Art Institute of Chicago. He has exhibited at NFA Space, Chicago; City of Chicago Cultural Center; Coventry Gallery, London; and in the 2002 Whitney Biennial. Noble has exhibited since 1975, including one-person exhibitions at Artists Space, New York; White Columns, New York; and Féile an Phoblacht, Belfast. Quinn has exhibited in Belfast, Dublin, Australia, Italy, and Philadelphia.

The Culture and Conflict Group was formed in 1998 with the intent to explore the intersection between art and politics in contemporary society and to challenge the assumption that art is neutral in any given context. The group itself has no specific geographical location, but represents the collective effort of artists and curators nationally and internationally. The group has organized a number of exhibitions specifically focusing on the Irish conflict. British Architecture in Ireland, featuring artists from Ireland and the United States, was held at the Puffin Room, New York, in 1998. In 2000, Ambiguous Authority, a group show featuring artists from Ireland, Britain, and the United States, ran at Beacon Street Gallery, Chicago, and was followed the same year by Unlimited Partnerships at CEPA Gallery, Buffalo, NY.

Settlement was commissioned as one of the projects in the 2002 At the Edge: Innovative Art in Chicago
series.