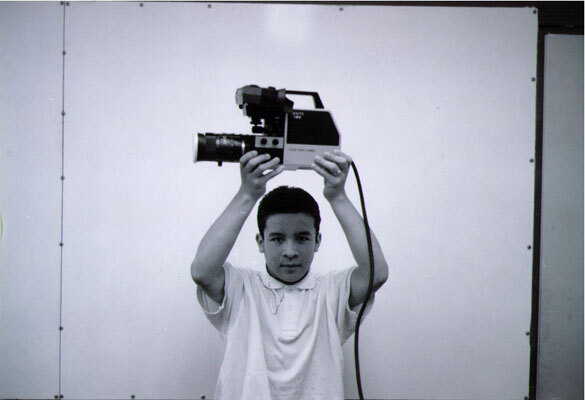 The San Miguel Arts Project served the children and young adults in the Back of the Yards community of south Chicago. Based out of San Miguel School and San Miguel Center, this program, in conjunction with a team of professional Chicago artists and DePaul University students, provided participants with arts training, mentorship, and resource support. The project began during the summer of 1997, when the realization of a permanent school space was underway. As a means of introducing a future Arts Curriculum at the school, 120-125 artists, musicians and cultural workers were contacted to participate in transforming the school’s environment. The proposed and installed artworks in the school were initially intended to provide a visual means for the San Miguel students to engage and complicate their assumptions of traditional and contemporary artworks on a daily basis. The result has served to provide both students and artists with a forum for critical explorations as well as a way to manage and apply a site-specific, creative literacy through meaningful production and intelligent dissemination of information and ideas.

The exhibit at Gallery 400 documented the results of this ongoing collaboration between Chicago artists and project participants, and showcased the artists ’, cultural workers ’ and DePaul Education and Art students ’ work created for the San Miguel School. Included in the show were works by artists who had been involved with San Miguel in the past, including a soft sculpture of a hairy birthmark by Sarah Whipple. Artist Michael Piazza worked with students to create the piece “In (Con) sequence.” Piazza had students highlight lines in found books, which were lined up on the gallery floor to create a new narrative. There were also other collaborative works by students, including a colorful narrative quilt that usually hangs in the school’s hallway. A host of artists provided a donation of their work to transform, elevate, inspire, and activate the aesthetic of the interior and exterior school community space. This show documented through photography, video, text, and actual pieces the results of the collective creative practice happening within the school since its inception. Also on display were proposals by artists for future projects at the school. The San Miguel Arts Project lasted for two years.