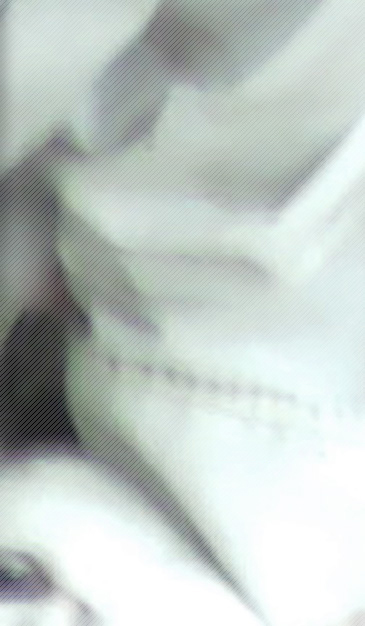 “I was in Karachi on December 30th, 2006, videotaping animals being slaughter[ed] in the parking lot of our apartment building. This was the day of Eid-ul-Adha, when Muslims all over the world sacrifice animals and distribute the meat amongst their family and the poor. The tradition follows prophet Abraham ’s example, who, without questioning, took his son Isaac to the top of a mountain, closed his own eyes, and slashed Isaac ’s throat upon Allah ’s command. This was a demonstration of Abraham ’s unconditional devotion to Allah. Allah rewarded Abraham ’s fidelity by intervening to replace the body of Isaac with that of a sheep. Only upon opening his eyes did Abraham discover that the sheep had replaced his son. Isaac stood alive beside his father while the sheep shook uncontrollably, bleeding through the neck before dying.”
-Asma Kazmi

Relation-Chute is a website created by Asma Kazmi as a platform for trans-disciplinary action and the accumulation of materials, people, and ideas. The aim of The Gathering, a series of planned related events at Gallery 400, is to bring together a community of people under one roof, to participate in an exchange that happened in words and beyond words through shared inhabited time and space.

Instigated by images of qurbani (religious sacrifice) of animals and their resonance with images of death and destruction that circulate commonly in the media, Relation-Chute attempts to change the artist’s relationship to pain and death by participating in the act of slaughtering animals for consumption. The method used for slaughter was Zabiha Halal, traditionally practiced by Muslims. As both a website and a series of planned public gatherings, Relation-Chute provides multiple arenas in which to contemplate the difficulty of understanding the complexities of visual images of death. The website confronts the viewer, alienated from the actual experience of killing because of his or her fragmentary sensory knowledge of the act. By implicating the viewer as a distant onlooker, the archive of photographs, videos, sound, and transcribed records of conversations invigorate dialogue about spectatorship and the singularity of the experience of pain and death.

Relation-Chute ’s public form was a manifold encounter to be realized through hosting performances, gatherings, screenings, and lectures. These public events are grounded in the belief that the distance between a viewer and an image can be reduced through generating an aesthetic of socially shared meaning and facilitating complex and open-ended interactions between people.

Relation-Chute was commissioned as one of the projects in the 2008 At the Edge: Innovative Art in Chicago
series.