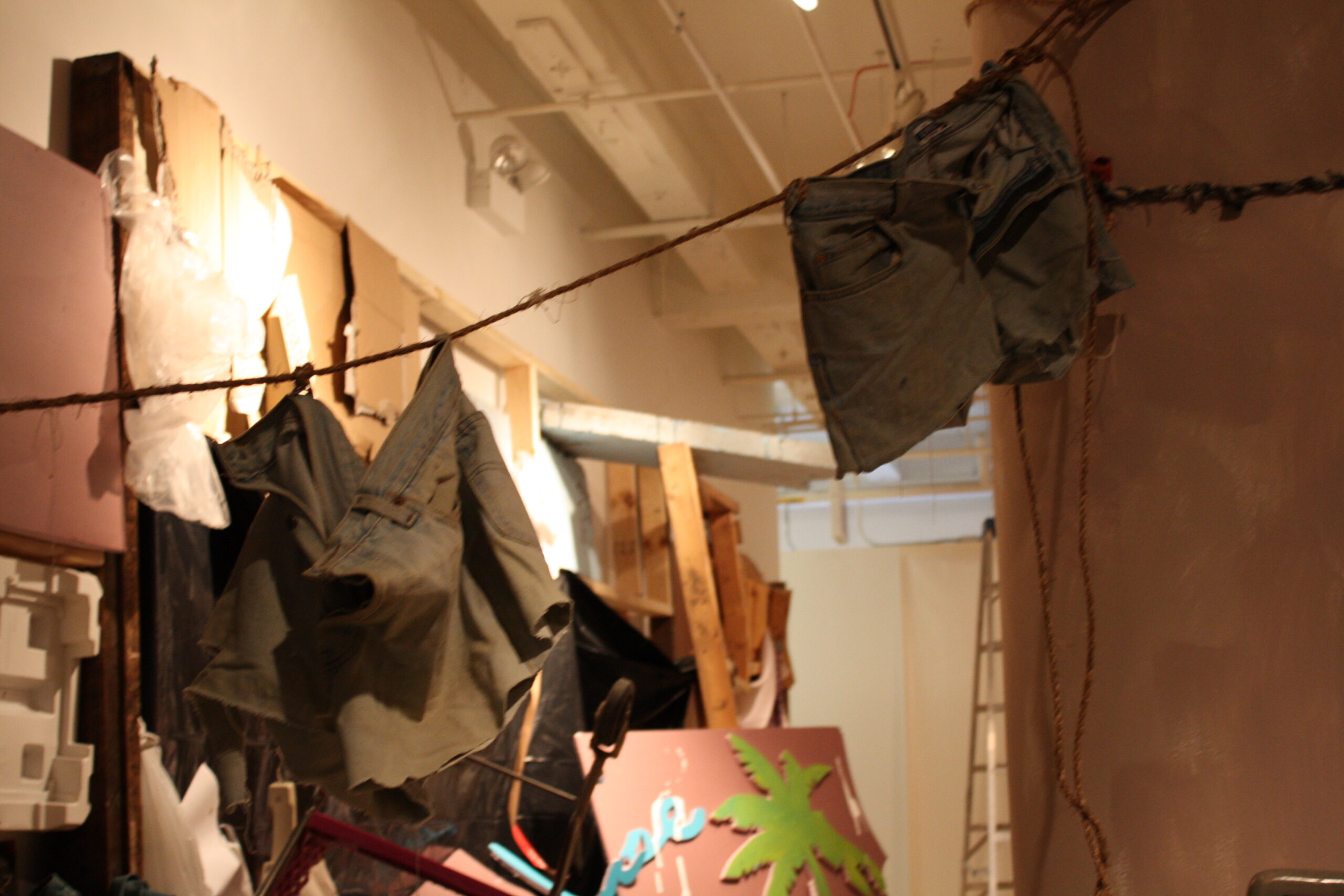 Project #12 is an installation by Michael Ruglio-Misurell, who transforms the gallery into an environment evocative of a shopping mall food court that has endured an undetermined event, possibly a disaster, abandonment, or human havoc. Built from found, painted, and handmade objects, Project #12 fluctuates between disorder and artifice.

Acting out what he describes as “destructive fantasies that are intrinsically linked to fear and uncertainty,” Ruglio-Misurell ’s installation seems to inhabit a narrative that is simultaneously disturbing and opaque. Built to resemble, at times, the covered landfills of Calumet, the rolling hills of Wisconsin, or the gravity-defying illusion of the Golden Terraces of Warsaw, Project #12 rambles through the gallery space, ricocheting off the columns and creating a chaotic landscape of contemporary detritus through which the viewers navigate. The gallery is stuffed with the material—old wood, disused wallpaper, abandoned shower doors, salvaged fluorescent light fixtures, parts of shelving units, broken doors, paneling, foam padding, fabric, wiring, display cases, urinals, carpeting, and much more. But within the disorder are hidden discrete groupings. Food trays and empty cups litter tabletops, as well as form hanging curtains. A plastic bottle, part of a fake plant, and a sock rest inside a urinal. Three pairs of men’s shorts are tied like flags to a line. These isolated clusters reveal a casual but fully intentional order within the disarray. Ruglio-Misurell ’s installation recalls the balancing act of collage, in which chaos and control, cacophony and formalism, are modulated.

Moreover, these arrangements of detritus echo the Romantic era’s exaltation of the ruin—and often of the fake ruin. For Romantics, the ruin as a fragment created a frisson for a viewer between a past and present, a launching point for the imagination. Some have suggested that the temporal paradox that made the ruin so compelling in the 18th and 19th centuries was a byproduct of the rise of museum culture. Collected and presented for a close examination, antiquity fragments in early museums lost any coherent unity that they might have had when viewed in situ from a distance.

Another aspect of museum history is also embedded in Project #12. As museum methodologies developed in the 19th and early 20th centuries, museum exhibitors borrowed the display strategies of department stores and shopping arcades. Project #12 evinces that continuing complicated relationship with the inclusion of empty and upended display cases that may once have held jewelry or just as easily museum objects.

Touching on sculptural collage, the artistic history of ruins, display strategies, identity, subjectivity, and the market economy’s reliance on waste, Project #12 provides a sketch of post-apocalyptic wreckage filled with vignettes, a grouping of objects that describes the story we have to create, like archeologists, to comprehend the ruins we’ve found.

Project #12 was commissioned as one of the projects in the 2009–10 At the Edge: Innovative Art in Chicago
series.

Project #12 is presented concurrently with HALFULL
and Reflection: a video program.