Pathogeographies: or, Other People ’s Baggage 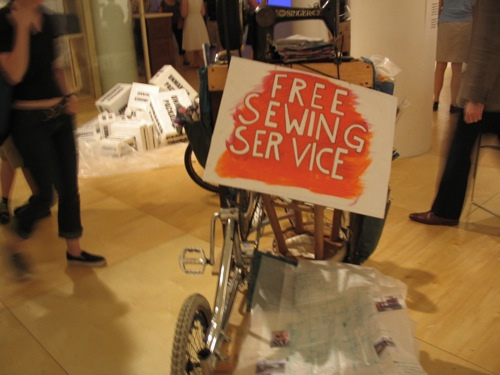 Pathogeographies: or, Other People ’s Baggage, is an exhibition organized by Feel Tank Chicago, which features art, performances, and activities devoted to the landscape of political emotion. Acting as a counterpart to think tanks, Feel Tank Chicago (Lauren Berlant, Debbie Gould, Mary Patten, and Rebecca Zorach) describes the landscape of political emotion and asks viewers to discuss their feelings about politics.

Through their critical engagement with the emotional temperature of the body politic, Feel Tank Chicago shines a spotlight on emotions big and small—depression, anxiety, rage, numbness, fear, and many others – that people often think of as purely personal, not political. Feel Tank suggests, in contrast, that daily life is full of politics—politics that take place in many different sites and situations (school, meetings, the street corner, the city, and the nation). Those politics produce emotions and are also fueled by them. Modeled on the Situationists’ psychogeography, but substituting pathos (feeling) for psyche (the soul), Pathogeographies emphasizes the emotional investments, temperatures, traumas, and ephemeral experiences, which circulate throughout the political and cultural landscape in ways that cannot be mapped empirically, but are best indicated allusively.

Drawings, photographs, zines, and print and video documentation are on view in the gallery, accompanied by site-based performances, artists ’ books, and websites. From the Library of Radiant Optimism to Cranky, the person lingering with A.I.D.S., Pathogeographies includes over 50 projects by groups and individual artists.

The public is invited to participate in Pathogeographies in numerous ways. A Festival of Political Emotion will be held at Gallery 400, in which visitors can view performances and take part in various activities, exploring their feelings about home, current events, and the sound of melancholy. By checking out and wearing artist Gretchen Vitamvas ’s camouflaged El Wear, gallery-goers are able to feel inconspicuous on the El. To investigate whether an object can fix their feelings, audience members can test out a psychological prosthetics therapeutic object, or vent their political outrage using the Rant Recorder. A visitor can help define the vocabulary of political emotion by writing and editing terms in Feel Tank Chicago ’s Feel [tank/Tool] Kit, or open suitcases stored in Collective Material Exchange ’s Left Luggage installation to see what other people ’s baggage looked like. At Pathogeographies, one can listen to dreams of soldiers stationed in Iraq, speak Bush-ese to discover how that felt, loiter for freedom, investigate the relationship between geo-political policy makers, the weather, and one ’s feelings, or vent one ’s rage by beating an old car with a sledgehammer. A Fifth International Parade of the Politically Depressed will be held, along with participatory workshops, round table discussions, a twenty minute opera, a letter writing project to super-max prison inmates, and much more.

What is at stake in such a project? Some might argue that despair is the pervasive/prevailing emotional current right now in many political communities—where the only “belief” is in our collective and accumulated failures—of stopping the war, of building a creative and effective left. The political arena seems either unthinkable or out of reach, eliciting intense cynicism from people whose votes are not counted, whose needs are ignored, whose grievances have no impact, and for whom “politics” signifies little but abuse of power. An unending sense of emergency is matched only by a corresponding sense of alienation, of not “knowing what to do,” and often, of not knowing what to think and how to feel. And yet, like so many, we persist; we are moved, not only by necessity, but by a relentless search for joy, for a life that can be called good and just. Can hopelessness be transformed? Is there anything useful about guilt? How might we collectivize our despair and our joys? To explore all these pathogeographies, Feel Tank Chicago calls on the audience for their ideas, energy, and participation.

Pathogeographies: or, Other People’s Baggage was commissioned as one of the projects in the 2007 At the Edge: Innovative Art in Chicago
series.