Out of Easy Reach 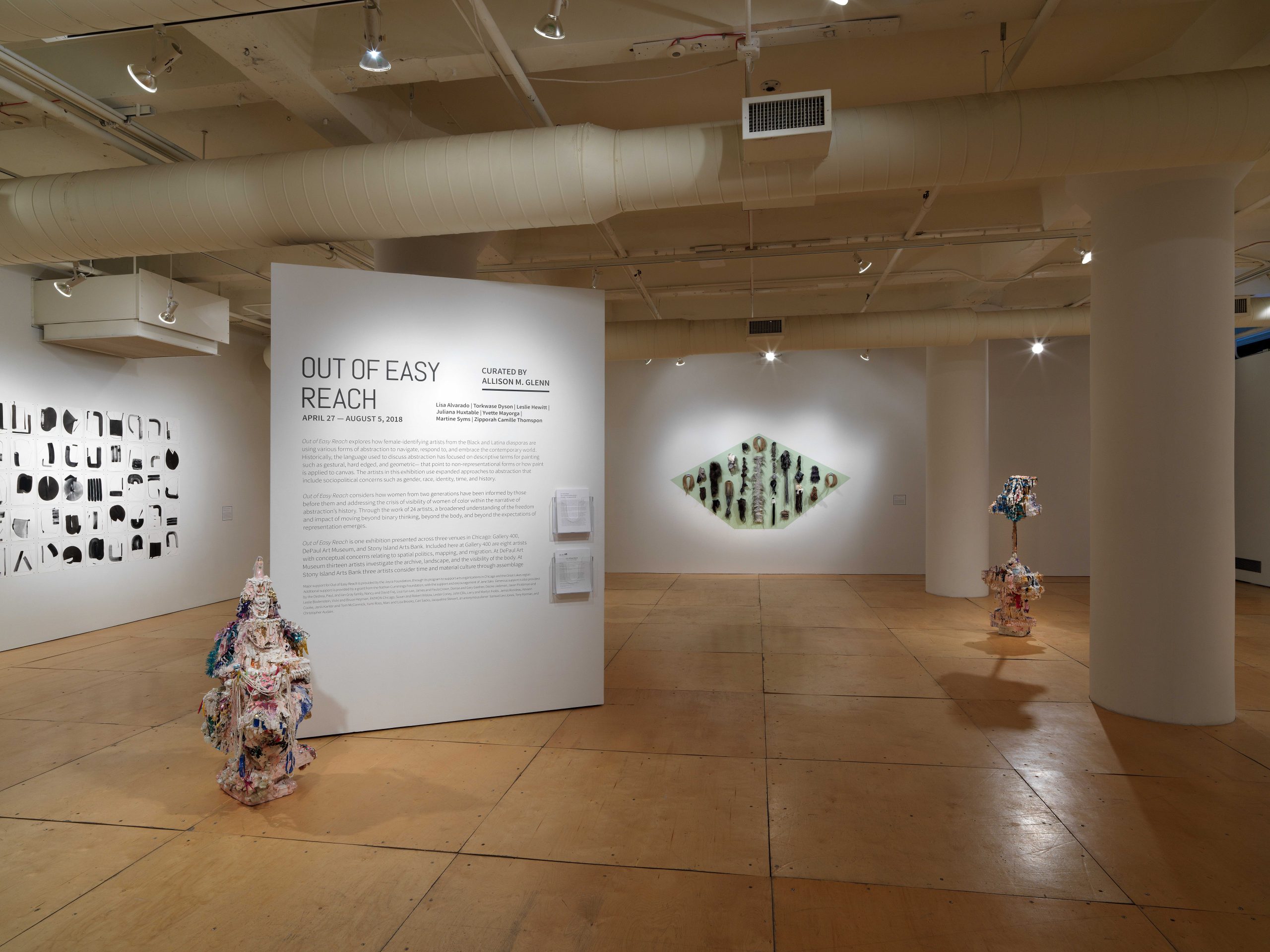 Gallery 400 in collaboration with DePaul Art Museum and Rebuild Foundation present Out of Easy Reach guest curated by Allison Glenn.

Countering conventional accounts of art history, which have often overlooked the artistic contributions of women of color, Out of Easy Reach presents 24 artists from the Black and Latina diasporas through artworks created from 1980 to 2018. The exhibition features myriad ways that three generations of artists use abstraction as a tool to explore both personal and universal histories, with an emphasis on mapping, migration, archives, landscape, vernacular culture, language, and the body. “The purpose of this exhibition is to articulate a continually expansive approach to the conversation around abstraction and contemporary art,” said Glenn, the exhibition’s curator and currently manager of publications and curatorial associate at Prospect New Orleans.

Allison M. Glenn is Associate Curator, Contemporary Art at Crystal Bridges Museum of American Art, where she focuses on how public sculpture can activate and engage the museum’s 120-acre campus with outdoor exhibitions such as Color Field, open through September 2019; traveling to The Baker Museum at Artis-Naples. Glenn has produced exhibitions within the galleries that explore concepts of identity, language, and relationships in art, such as Personal Space(2018) and Small Talk (2019). She is on the curatorial team for State of the Art II, which will open in 2020 at the Momentary.

Glenn was previously the Manager of Publications and Curatorial Associate for Prospect.4:The Lotus in Spite of the Swamp, curated by Trevor Schoonmaker, which opened November 2017.

Previous exhibitions include Out of Easy Reach, which was on view simultaneously at DePaul Art Museum, Stony Island Arts Bank and Gallery 400 through August 2018 (Chicago, USA); it traveled to Grunwald Gallery at Indiana University; In the beginning, sometimes I left messages in the street, a multi-sited public art project (Chicago, 2016); Look at me Now!, Monique Meloche Gallery (Chicago, 2015); Feedback, Arts Incubator, University of Chicago (Chicago, 2013). In 2015, Glenn was a Curatorial Fellow with the City of Chicago’s Department of Cultural Affairs and Special Events and named to the “Art 50: Chicago’s Visual Vanguard” list for significant contributions to the development of arts and culture. Her writing has been featured in exhibition publications such as Noah Purifoy: Junk Dada, The Los Angeles County Museum of Art (2015); Prospect 3: Notes for Now, Prospect New Orleans Triennial (2014); Fore, The Studio Museum in Harlem (2012), and she has contributed to Hyperallergic, ART21 Magazine, Pelican Bomb, and Newcity, amongst others.

Out of Easy Reach, accompanied by a catalogue, traveled to the Grunwald Gallery at Indiana University in Bloomington, Indiana where it ran from Aug. 24 to Oct. 4, 2018.