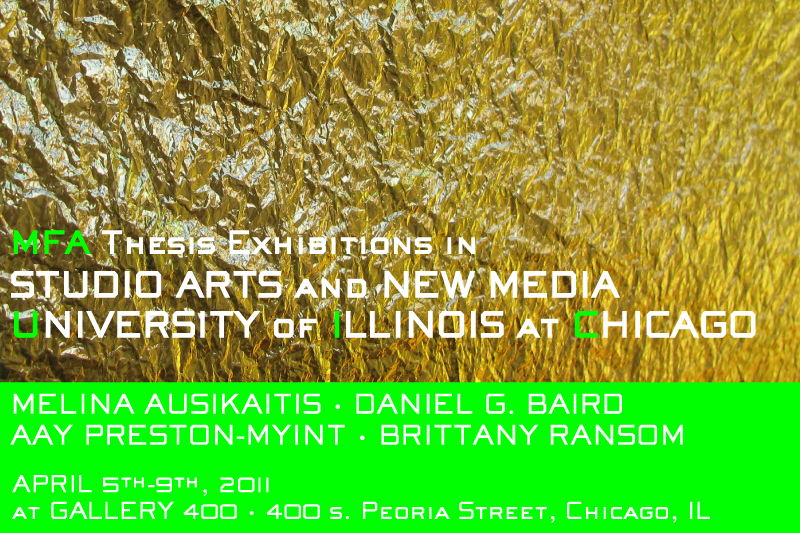 Aay Preston-Myint reconfigures and disrupts familiar objects and sites to depict a critically queer space: a proposition about bodies and relationships in our present and future, in which new iterations of violence and hierarchy compete with new iterations of expression and identity.

Melina Ausikaitis surrounds her audience with the interior of her head through performance, singing, and drawing. Moments of ecstatic aloneness are presented to the open air in all their shrinking and earnest uncomfortableness.

Daniel Baird creates work that is invested in the interplay between technological advancement, preservation and time.

Brittany Ransom makes work that probes the lines between human, animal, and environmental relations. Her work explores our society’s dependence on emergent technologies and the conflicted relationship to nature, calling for a paradoxical co-evolution between the two.

Jesus Duran creates while meditating on the effects technology has on social constructs, behaviours, physical actions and the sense of self.

Min Song makes two- and three-dimensional work that deal with space and surface.

Latham Zearfoss‘s work often centers on reclaiming historical and mythological texts, and revising them to incorporate radical notions of love and sex, possibility and probability.

Christopher Meerdo‘s work is located in the space between the absence and revealing of memory, its authenticity confirmed or denied through the use of photography, sculpture, and moving images.

Rebecca Beachy explores human processing, material intimacy and traumatic affect in the context of an ambivalent relationship with nature through sculpture and installation.

Mike Gibisser uses the poetics of the moving image while drawing on scientific and cultural phenomena to investigate the nuance and instability of time, memory, and affect.

Joe Pankowski has developed an ever-expanding daydream in countless drawings, and has brought these to life using stop-motion animation and out-dated technology to emphasize the mechanical absurdness found in his sketchbooks.

Tim Nickodemus paints fragmented images from the body which lie between the visual and the tactile.

JD Pirtle works equally as an artist, programmer, and creative technologist to focus on visualizations and sonifications that bridge the void between convention and technological horizon.

Stephanie Tisza makes videos that depict the poetics of place, character and mood.

Michael Radziewicz makes sculpture and photography and lives by C.R.E.A.M.