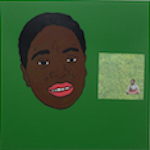 Please join Gallery 400 for a panel discussion coinciding with our current exhibition, David Leggett: Black Drawls. The discussion will explore themes found in Leggett’s work such as hierarchies of taste both within and outside the art historical canon, popular culture and contemporary art, relationships between reference accumulation and artmaking, and the implications of post-blackness in the contemporary art context.

The discussion will be followed by a Q&A.

Lorelei Stewart, Director of Gallery 400 since 2000, has organized over 40 exhibitions, including the Joyce Award-winning exhibition Edgar Arceneaux: The Alchemy of Comedy…Stupid (2006). In 2002, she initiated the acclaimed At the Edge: Innovative Art in Chicago series, a commissioning program that encouraged Chicago area artists’ experimental practices. She holds a BA from Smith College, a BFA from Corcoran College of Art and Design, and an MA in Curatorial Studies from Center for Curatorial Studies at Bard College.

Roderick A. Ferguson is the co-director of the Racialized Body research cluster at UIC. Prior to his appointment there, he was professor of race and critical theory in the Department of American Studies at the University of Minnesota, serving as chair of the department from 2009 to 2012. In the fall of 2013, he was the Old Dominion Visiting Faculty for the Council of the Humanities and the Center for African American Studies at Princeton University. In 2004, he was Scholar in Residence for the “Queer Locations” Seminar at the University of California’s Humanities Research Institute in Irvine, California. He is the author of Aberrations in Black: Toward a Queer of Color Critique (2004), in addition to other numerous articles and books. He is the co-editor with Grace Hong of the University of Minnesota Press book series Difference Incorporated. Also with Hong, he is the co-editor of the anthology Strange Affinities: The Gender and Sexual Politics of Comparative Racialization (2011).

Erin Jenoa Gilbert ​born in Berkeley California, raised in Blantyre, Malawi ​is a curator, critic and cultural producer ​specializing in ​contemporary ​art of the African ​diaspora. She holds a B.A. in Political Science and African & African American Studies from The University of Michigan and an M.A. in Contemporary Art from The University of Manchester. Most recently the Director of Kruger Gallery Chicago & Marfa, Gilbert previously held positions at The Art Institute of Chicago and The Studio Museum in Harlem. Having lived in the US, Africa and the UK, she is deeply concerned with issues of national identity, migration and immigration. Exploring the relationship between art, power and politics, her curatorial projects examine the physical and psychological connection to land, the trauma of displacement and the body as a contested terrain. The​ intersectionality of race, gender and class in works of art by ​artists​ African descent informs her work in both the museum and gallery space.

Cauleen Smith (born Riverside, California, 1967) is an interdisciplinary artist whose work reflects upon the everyday possibilities of the imagination. Operating in multiple materials and arenas, Smith roots her work firmly within the discourse of mid-twentieth-century experimental film. Drawing from structuralism, third world cinema, and science fiction, she makes things that deploy the tactics of these disciplines while offering a phenomenological experience for spectators and participants. Her films, objects, and installations have been featured in group and solo exhibitions. Smith was born in Riverside, California and grew up in Sacramento. She earned a BA in Creative Arts from San Francisco Sate University and an MFA from the University of California, Los Angeles School of Theater Film and Television. Smith is based in the great city of Chicago and serves as faculty for the Vermont College of Fine Arts low-residency MFA program.