It ’s the Political Economy, Stupid 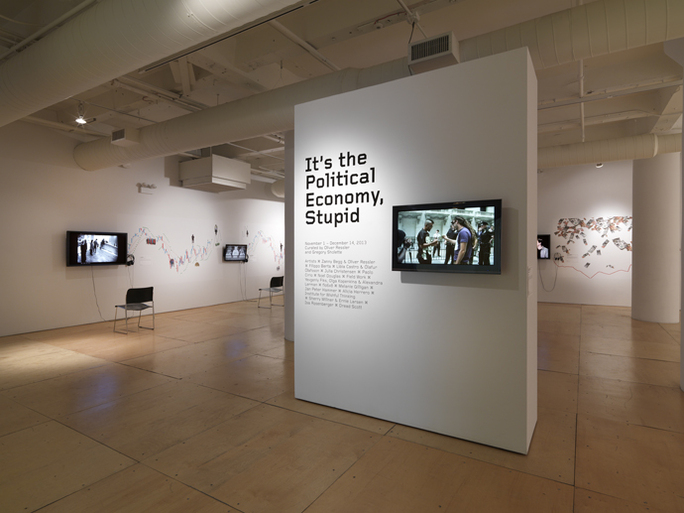 Chicago-born artist Dread Scott stands on Wall Street burning dollar after dollar before the police show up in Money To Burn, just one of over a dozen contemporary videos and artworks that make up It’s The Political Economy, Stupid. A traveling exhibition co-organized by Oliver Ressler and Gregory Sholette, It’s the Political Economy, Stupid features video, photography, installation, and drawing by artists from around the globe who critically address the “new norm” of the prolonged economic and political crisis that began in 2008. The title of the exhibition stems from James Carville ’s catchphrase, “It’s the economy, stupid,” which became closely identified with Bill Clinton in his 1992 presidential campaign. Over three decades, neoliberal capitalism has driven most of the world’s governments to partly or wholly abandon their roles as arbitrators between the security of the majority and the profiteering of the corporate sector. It’s the Political Economy, Stupid proves that both art and artists can productively engage the seemingly insurmountable problems that stem from capital, crisis, and resistance. The exhibition is accompanied by a catalog (Pluto Press, 2013) featuring analysis and essays by Slavoj Žižek, Brian Holmes, Judith Butler, David Graeber, Julia Bryan Wilson, and John Roberts, among others.