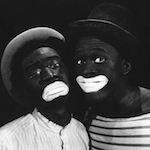 Ethnic Notions is Marlon Riggs’ Emmy-winning documentary that takes viewers on a disturbing voyage through American history, tracing for the first time the deep-rooted stereotypes which have fueled anti-black prejudice. Through these images we can begin to understand the evolution of racial consciousness in America.

Narration by Esther Rolle and commentary by respected scholars shed light on the origins and devastating consequences of this 150 yearlong parade of bigotry. Ethnic Notions situates each stereotype historically in white society’s shifting needs to justify racist oppression from slavery to the present day. The insidious images exacted a devastating toll on black Americans and continue to undermine race relations.

Approaching a complex and delicate subject with great sensitivity, Ethnic Notions equips viewers to view media and other cultural representations with a more critical eye. It’s a direct challenge to those who say, “It was just a joke.”