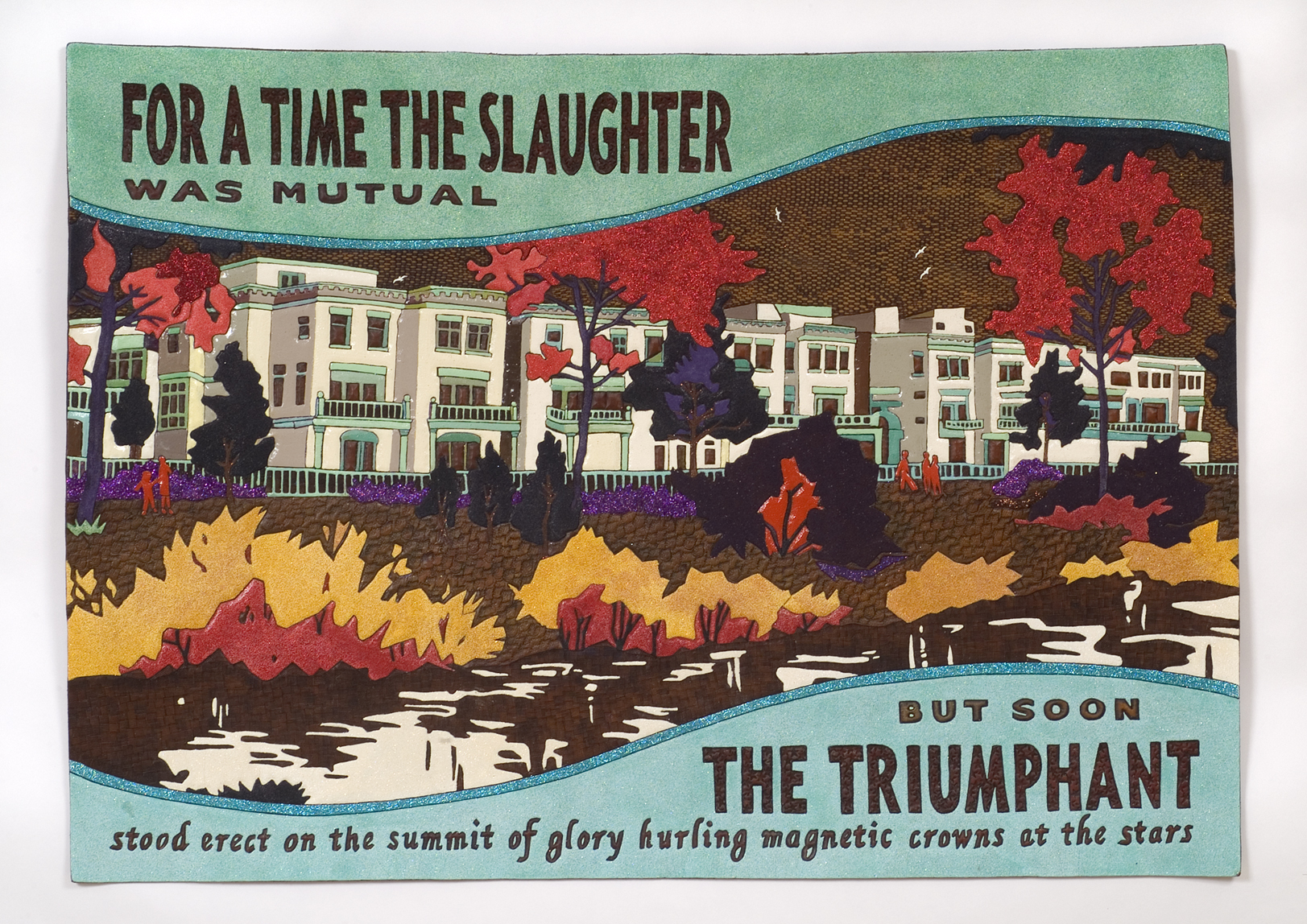 Gallery 400 presents an exhibition of new and recent works by Chicago-based artist Carol Jackson. Jackson ’s signs, sculptures, gouaches, and drawings use common, everyday “signatureless” styles to let loose the grandiose morality within the picturesque languages and visuals of advertising. Her work is a bitterly humorous send-up of the demands and promises commercial representations make on behalf of goods, be they detergent, food, or real estate. Long focusing her energies on a series of meticulously hand-tooled leather reworkings of both store advertising and real estate development signage, Jackson replaces the found text with disdainful, mistrustful and self-deprecating thoughts, which the language of sales strives to repress. What remains is the epic longing and promissory nature of the address.

In making her sculpture from a material – hand-tooled leather – within an artisanal tradition, Jackson pours untold amounts of labor into her objects in order to create a surface that viscerally affects the viewer. By adding an obsessive, seemingly incongruous detailing into the overall copied designs, Jackson’s signs do not support the perceived structure of the originals à la Pop Art style celebrations of quotidian commercialism, nor are they slick appropriations of commercial language. Crafting the signs in leather reveals, in a painfully physical manner, the messages as commodified dreams stamped on the hides of animals.

The visceral leather works have been complemented in recent years by drawings and gouaches done in a style that mixes mid-century Social Realism and children ’s book illustrations. These works on paper, while aesthetically calling to mind proverbs, fables or cautionary tales, offer ambiguous scenes of militia men training in luxury mansions and animals morphing into topographical formations. The constant litany of uncomfortable psychic spaces in these works challenges the easy detachment, which the “us and them” moral certitude tries to provide. Instead, this better-living-through-design world apocalyptically documents the raging ethical undertow within commercial space that we ignore at our own risk. Jackson ’s practice collectively poses tough and damning questions of our complicity in commercial signage and brings to the surface the epic narrative of desire, fantasy, belonging, and otherness that the signs evoke within the viewer.