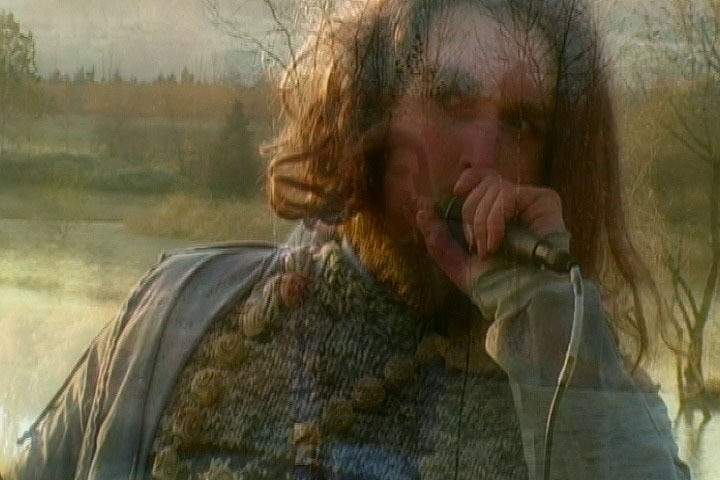 With the exhibition Black Iron Vatican, Andy Roche develops an aesthetic examination of the Catholic left. In an installation of multiple video works and posters, Roche establishes a relationship between the subjectivity expressed in the radical witnessing of Catholic leftists and the reverie of pop culture devotees holed up behind bedroom doors. Featuring elements of this, Roche ’s first solo exhibition includes a recitation of the rosary as a howling dub performance, images of nuclear warheads played like marimbas, the arrests that follow the annual protest trespass at Fort Benning, Georgia, and scenes of ecstatic collective protest.

The central piece, Black Iron Vatican, a 16 minute silent video, shifts through planes of allusion and documentary, with evocative results. Opening with a scene of discussion, possibly religious testifying, the action quickly segues into found footage of the Hennessey sisters, famous siblings and Franciscan nuns from Dubuque, Iowa, who were long-time participants in radical social activism. In 2001, Dorothy and Gwen, at the time aged 88 and 68 respectively, were sentenced to 6 months each in federal prison for trespassing on Fort Benning ’s Western Hemisphere Institute for Security Cooperation (formerly the School of the Americas), a base implicated in the training of Latin American paramilitary groups known for human rights abuses. Setting a foundation for issues of witnessing, surveillance, testifying, higher powers, and subterfuge, the Hennessey sisters ’ imagery gives way to hammering hands and commences with a series of disconcerting inter-cuts, including recent footage of Fort Benning protests, that suture together the mundane and the fantastical as based in faith and body. In fleeting footage that is sometimes frenetic and sometimes elusive, even foreboding, the zone of trespass at Fort Benning is established. When one protestor, enacting her belief, quickly crosses that line, the force of her capture is felt through a long close-up shot. The fuzzy and faded exposures and focus of Black Iron Vatican recall the formal qualities of independent cinema as well as leftist guerilla filmmaking of the 60s and 70s, evoking questions about the position of the sites, activities, and aesthetics of contemporary protests, in so far as they have been influenced by established histories and practices.

Several other works in the exhibition, both videos and posters, raise questions of disappointment, powerlessness, worship, and fellowship. One video work, Announcing the Mysteries (19 min.), takes as its inspiration long-running Catholic television programs featuring rosary recitation. The original programs typically feature soft focus and super-imposed edits with multiple camera angles trained on an idyllic youth in a lush landscape leading the rosary, first on his own and then slowly joined by others in his or her faith. In his self-performed work, Roche ’s incantation is more guttural and ambiguous. Isolated in a rural landscape, his primal repetitions point toward an earthbound aesthetic and incomprehensible pain as well as a faith that eludes definition as either ironic or sincere. Roche ’s posters, drawn from Super 8 film sequences, explore these themes in highly saturated imagery manipulated through film distortion and layering, video processing, and radical scale shifts. Throughout the exhibition, the failure to attain a true transcendence of spirit was omnipresent; the body from which this expression was uttered continually betrayed the ecstatic witnessing that Roche portrayed.

Black Iron Vatican was commissioned as one of the projects in the 2008 At the Edge: Innovative Art in Chicago
series.