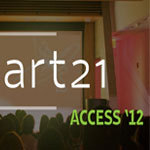 Gallery 400 is proud to screen two episodes from Season 6 of the Peabody Award-winning television series Art in the Twenty-First Century
in advance of the broadcast premiere:

This episode features artists who bear witness, through their work, to transformation cultural, material, and aesthetic and actively engage communities as collaborators and subjects.