A worry-free life or your money back 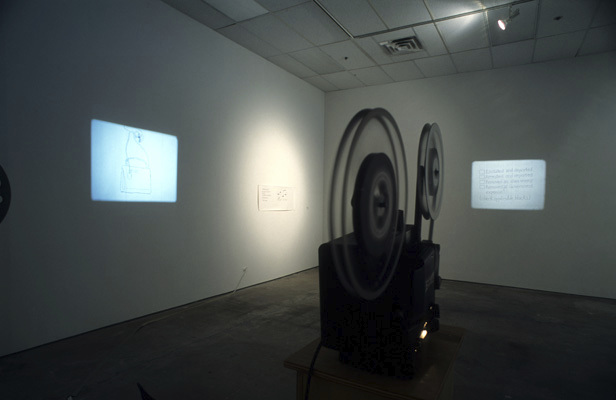 In her first multi-piece one-person exhibition at Gallery 400, A worry-free life or your money back, Jenny Perlin exhibits four recent 16mm silent films, a three-channel video projection, and several series of drawings. Three of the films, Rorscach, Schumann, and The United States in a Chaotic World are animated from hand-drawn images appropriated from psychological evaluation tests, store receipts, maps, music scores, fortune cookie texts, gardening diagrams, and the like. The psychological self-help histories, Taylorist strategies for labor efficiency, and histories of U.S. territorial expansion included in the films thread together individual psychology and social, political, and historical meaning and place each squarely within the other. The fourth film, Washing, pictures the 2002 lower Manhattan skyline through a window in Brooklyn. In a short loop, the window is continuously wiped and washed by a single hand. That the gesture repeats over and over poignantly evokes the loss marked on the city ’s landscape and skyline, which was also a collective trauma endured by a society. Drawing connections between disparate areas of contemporary modern life to challenge the compartmentalization of consciousness, Perlin ’s hand-drawn black and white films disarm with their beauty while quietly demonstrating the complexity of the socio-political moment and making a case for questioning the status quo. Three series of drawings from which the films were animated are also included in the exhibition.

A worry-free life or your money back also premieres Perlin ’s new three-channel video projection Sight Reading. In a Structuralist vein, Sight Reading depicts three professional pianists attempting to perform a piece of music they have never seen before. Each pianist is shown in a separate projection, and each starts the piece at the same time. They then continue playing at their natural speed. The work, Robert Schumann ’s Piano Concerto in A minor, is challenging, and the pianists make mistakes. After a mistake, the pianist ’s screen goes dark for five seconds, and their music stops, while the other pianists continue uninterrupted. Then the projection resumes, and the pianist continues playing. The more challenging the piece becomes, the more mistakes the players make, and the more the three projections turn off. In this piece, the editing itself becomes the taskmaster, the act of cutting determines a player ’s presence as performer. A screening of other Perlin films also accompanies the exhibition.