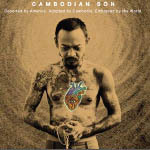 Winner of the Top Documentary prize from the Center for Asian American Media s 2014 Film Festival, Cambodian Son (2014, 90 min.) is a documentary about deported poet Kosal Khiev as he navigates a new found freedom. Kosal would travel to London having only taken two flights prior; first, as a 1-year-old refugee child whose family fled Cambodia and, then as a 32-year-old criminal “alien” forcibly returned to Cambodia in 2011. Armed only with memorized verses, he must face the challenges of being a
deportee while navigating his new fame as Phnom Penh’s premiere poet. After the performances end and the London stage becomes a faint memory, Kosal is once again left alone to answer the central question in his life: “How do you survive when you belong nowhere?”

The documentary is directed, filmed, and edited by Masahiro Sugano. Sugano holds an MFA in film, video and digital animation from the University of Illinois at Chicago.

Cambodian Son is presented as part of the “Migrations, (Dis)placements, and Resistance Film Series” organized by the Asian American Studies andAsian Studies Programs at UIC and co-sponsored by the UIC AANAPISI Initiative, Gallery 400, The Social Justice Initiative, and The Institute for Research on Race and Public Policy.