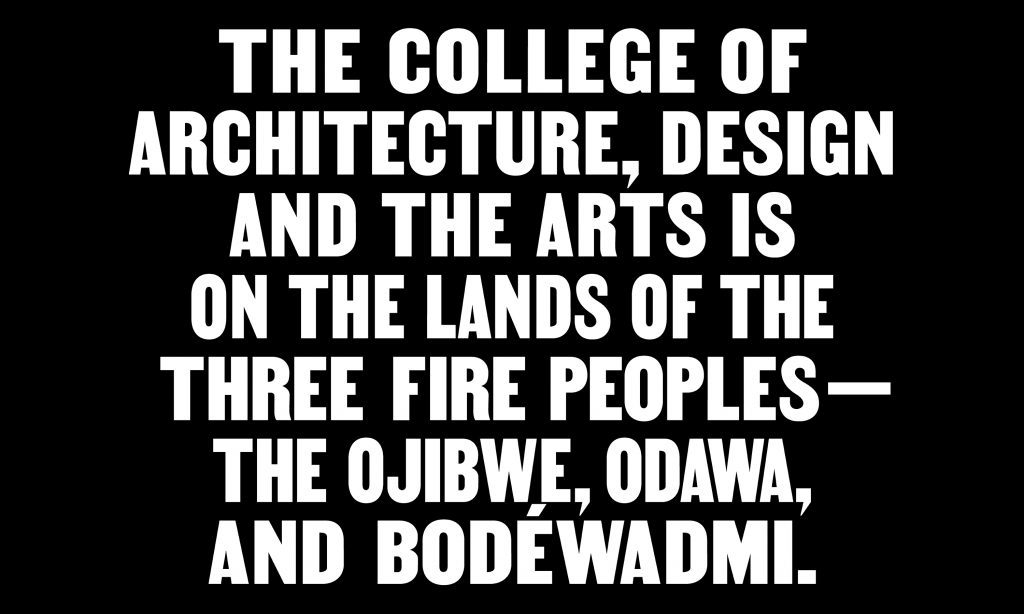 UIC’s College of Architecture, Design, and the Arts is located on the traditional homelands of the Three Fire Peoples — the Ojibwe, Odawa, and Bodéwadmi. Illinois is currently home to more than 75,000 tribal members, and the Chicago area includes one of the most diverse urban Native communities in the US. Illinois is also the territory of other native communities, including the Ho-Chunk, Miami, Inoka, Menominee, Sac, Fox, and their descendants.

These lands were the traditional birthright of Indigenous peoples who were forcibly removed and who have faced two centuries of struggle for survival and identity in the wake of dispossession.

The college embraces a commitment to Indigenous rights, cultural equity, and racial justice through this acknowledgment, and a commitment to supporting the Indigenous architects, artists, designers, performers, and scholars in our community by recognizing their past and current contributions to each of our disciplines.

UNIVERSITY RESOURCES
University of Illinois statement
Native American support services
EVENTS AND PROJECTS
The School of Theatre and Music held a panel titled, “The Actor’s Journey: Theatre-making and Indigeneity,” held January 27, 2021. Co-hosted by Cynthia Soto (Sicangu/Lakota and Puerto Rican), Director of UIC’s Native American Support Program and Associate Professor Tanera Marshall, the event included guest panelists June Thiele (Athabascan and Yup’ik) and Elizabeth Laidlaw (Cherokee). Thiele and Laidlaw discussed the ways in which their art making experiences have been informed by their multiple identities, beginning with their indigeneity, and how they have navigated dynamic career paths through the worlds of theater, TV, and film as actors, writers, directors, and producers.
A land acknowledgment campaign which includes collaboration with Indigenous faculty, the Office of Diversity, and college and campus leadership to put in place posters and stickers, designed by graduate graphic design student Josh Cook.
Mission Dean’s Message History Board of Advisors