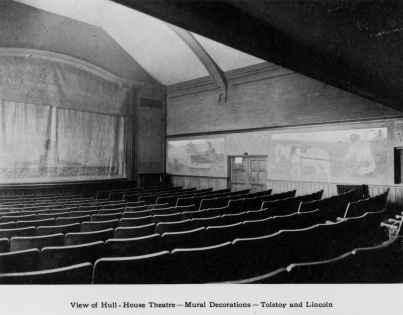 “One-Off“ is an OpEd feature of the CADA e-newsletter designed to instigate discussion and debate within the College’s community by presenting a current preoccupation of one of its members. The views expressed in the column are those of the author, Associate Professor and Director of the School of Theatre & Music Christine Mary Dunford, PhD.

On the occasion of the exhibition Participatory Arts: Crafting Social Change at Hull-House, opening on campus this fall, I have enjoyed taking a few moments to reflect on similarities of purpose and method between the residents and neighbors of Hull-House in the late 1800s and the faculty, staff, and students who work and learn at Hull-House and the UIC School of Theatre & Music (STM) today. Specifically, as I have reread Jane Addams’s writing about the first 20 years at Hull-House and her famous essay about the “play instinct” and the arts, I have enjoyed, and been comforted and energized by, a profound sense of common understanding, of common purpose, of connection across time. Our common understanding is that human beings engage in performance, including the arts, to make sense of being in the world. Our common purpose is to deploy the arts to improve the experience of being in the world and, indeed, to improve the world itself.

Both institutions, or rather the people within both institutions, were, and are, mission driven. Addams established a settlement on Halsted Street in 1889, a community of people who welcomed immigrants and artists and who dedicated their time, talent, and treasure to “aid in the solution of the social and industrial problems which are engendered by the modern conditions of life in a great city.”1 As the description for the current Participatory Arts exhibition explains, “In addition to advocating for fair labor, equitable housing practices, and full citizenship rights for immigrants, women, and children, the social reformers encouraged self-expression, community building, and social change through the arts. They believed that participation and access to the arts was a fundamental part of democratic society. Art at Hull-House was a way to bridge differences and support a pluralistic society.” Addams, with characteristic directness and wit, declared that, in service to her mission, “We would have been dull indeed if we had not availed ourselves of the use of the play at Hull-House, not only as an agent of recreation and education, but as a vehicle of self-expression for the teeming young life all about us.”2 Addams and her compatriots availed themselves of the play, but also of art, music, metal working, book binding, ceramics, dance, and gymnastics. From the first year, concerts were given every Sunday afternoon in the Hull-House drawing room; in the second year Ellen Gates Starr offered a class in Shakespeare, and just a few years later the Hull-House Students’ Association produced its first play.

Likewise, UIC, one of the most ethnically and culturally diverse universities in the nation, aims to create knowledge that transforms the world; to provide a wide range of students with the educational opportunity only a leading research university can offer; and to address the challenges and opportunities facing not only Chicago but also all the great cities of the 21st century. And we at UIC would be dull indeed if we did not avail ourselves of theatre and music, as the STM mission states, in order to “develop practical knowledge, cultural sensitivity, intellectual resourcefulness, and imaginative daring in emerging artists and scholars.” The more than 200 teeming youth enrolled this fall in one of seven undergraduate theatre and music degrees at UIC, as well as the additional non-degree youth, who major in subjects like biology, business, or engineering while also playing in one of over a dozen music ensembles, are a racially, ethnically, and economically diverse group; most are from across the city or the region; some are immigrants; many are first-generation university students, and/or first-generation formal students of the arts.

Jane Addams’s vision for the arts extended to all people, to children and adults of every background. Her aim was “To give every child in our schools the ability to use his hands with ease and pleasure . . . in order to retain that power of unfolding human life which is implicit in the play instinct. If it had a natural expression it would normally develop into the art impulse with that power of variation which industry so sadly needs to redeem it from its extreme mechanization”3 – or, in the present moment, which our world so sadly needs to redeem it from any one of a number of extreme “isms.”

To teach and train students to make, study, and experience art with ease and pleasure – this is our common endeavor. But also, to teach and train them to make, study, and experience art with purpose. For many, if not most, it will not be easy. While few STM students are in serious threat of facing a job characterized by the deadening monotony of mechanization, many certainly face a future characterized by the burden of both debt and uncertain income. Addams might have been referring to STM students and their families when she explained that children who participate in clubs and arts education at Hull-House “are under the economic stress and pressure of life more and more as they grow older and . . . their families ask for promise of some practical returns upon their work [as arts students].”4 I am comforted by the fact that the faculty who teach theatre and music at UIC do so because they believe in the power of the arts to change, charge, and empower the next generation of artists, the next generation of people who will have the imagination, the skill, the discipline, and, as Chancellor Amiridis says, the grit, to make art a life-long vocation because it gives pleasure, but also because art has the power to remake the world. And, I am confident that, with practical knowledge, cultural sensitivity, intellectual resourcefulness, and imaginative daring, our teeming youth are equipped, not only to survive, but also to thrive in the face of whatever lies ahead – indeed, they are equipped to create what will lie ahead.